You are here:
Diamonds 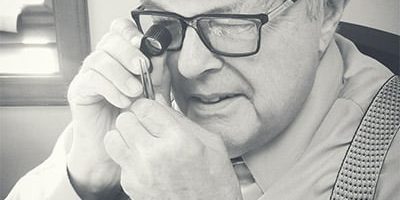 RB Grampp Sr., CEO, and founder of Bluestone Trading Company Inc., age 74, grew up in Pepper Pike, Ohio. He was an entrepreneur for as long as he can remember, from optimizing his paper route at 12 years old to starting Bluestone Trading, an international diamond wholesale organization that has grown to include his family.

RB’s paper route was when he first got his taste for entrepreneurship. It was the 1950’s and newspapers were delivered to almost everyone’s mailbox. One customer met him at the end of the driveway one morning and said he’d give little RB a dollar a week to take the paper all the way to the door. Seeing as he was only making 7 cents per mailbox a week, he immediately agreed. His first satisfied customer!

Soon his neighbor noticed, and asked if he could have the same service if he paid the extra dollar a week, and the customer base grew. RB’s paper route became a massive source of income. Looking back with a laugh he couldn’t help but be impressed. “Now I’m 12 years old making 100 bucks a week when gas is 27 cents a gallon!” He became known at school for being an entrepreneur well before his first real business.

The First Dive into Wholesale

RB’s first business was a national novelty wholesale. From posters to incense, the 60’s made for interesting stock. He was even the first importer of screw-in black lightbulbs to backlight posters. But one of his most popular items was wine-skins from Spain, for the music-festival crowd who couldn’t bring bottles of alcohol into the festivities.

New to the Business

Bluestone Trading started during Jimmy Carter’s presidency, when stagflation, a phenomenon that occurs when there is massive inflation and limited economic growth, became a major issue in the American economy. RB recognized that this was a time to invest in silver and gold; their prices would soar as paper money lost value.

He started with local stores, buying their inventory, with the goal of collecting a large amount of precious metals. But soon he realized he needed to widen his footprint.

“Now this was before the internet, so I just started buying out-of-town newspapers to see who was running ads buying gold and silver, and started contacting them.”

But the more gold and silver jewelry he bought, the more diamonds he amassed. He knew that they were worth something, he just didn’t know how much.

“I didn’t know anything about diamonds at that time, so I sourced for people to cut out, clean, and sort.”

Gold value then crashed. RB’s new source for diamonds became traveling every Wednesday from Cleveland to the New York Diamond District on a $29 flight.

RB grew his business by treating people the way he wanted to be treated. His Midwestern values of honesty and integrity have passed onto his children. “It’s the way I started. It’s the way it’s operated.”

He knew that a great way to set his venture apart was to bring goods to the market at the right price. “We leave money on the table for the next person,” said RB. “It’s no secret, we just work on smaller margins.”

Likewise, Bluestone has been a strong cash buyer from the jump. He drove around Cleveland, Ohio, buying local stores’ inventory on his Enduro Motorcycle with a gold scale in the trunk because “who wants to drive a car in the summer?” Today, Bluestone is still a valuable and quick avenue to liquidate loose diamonds and estate jewelry stock, by offering same-day payment or overnight check.

RB always recognized, however, that how he treated people was most important. “Without customers, you’ve got nothing,” he said. Above all, the best strategy is honesty. “I always tell people what I think is the truth. I can walk in any store in the country, and don’t have to worry about seeing someone I’ve cheated”

For him, money isn’t what Bluestone is about. The friendships built with customers is what sets his business apart. “We’re honestly friends with a lot of our customers and enjoy it. A lot of our competitors don’t want to talk unless they can make money off you.”

It just so happened that the industry liked someone who not only treats people well but is willing to share insights and knowledge with others in the business. “If you help people out with finding the information they need, naturally, when they have something to sell, they’ll think of you first.”

Bluestone has been an open resource for the diamond and estate jewelry industry since its incorporation in 1978. From a major investment in Polygon for the diamond industry to continuing-education seminars for pawnbrokers, Bluestone Trading has always made furthering the strength of the market a priority.

Bringing Family into the Business

RB has brought his children, Ritchie, Morgann, and Cody Grampp into Bluestone’s operation. “I have great joy in watching them succeed in a business I started. They’re treating people the right way.”

Two things get him up every morning: four dogs and seeing the sunrise. His hobbies include snowmobiling, off-roading, backgammon, board games, and playing cards for bragging rights. On weekends he can be found visiting with his friends and family, at church, or staying at historical hotels and B&B’s throughout the U.S.

Responding to a Horrible Review
February 1, 2021

How to Reclaim Savings with Recycled Diamonds
September 24, 2020