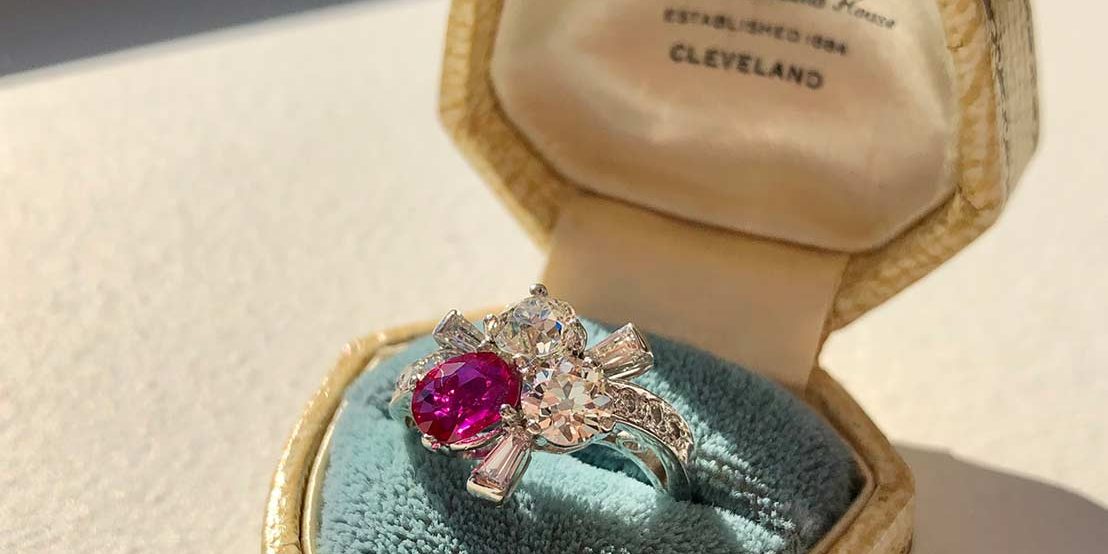 A groove worn into the floor of the historical Cleveland Arcade tells a story of shoppers stopped in their tracks over the decades. What would halt the procession of shoppers and the city’s flow of sidewalk traffic so abruptly? A display of jewels centered in the H. W. Beattie and Sons window answers with an artistic sparkle.

H. W. Beattie was one of Cleveland’s prominent diamond merchants. He incorporated H. W. Beattie & Sons in 1884 and later operated it with his children Reveley G., Hugh N., and Milton M. Famous for their jewelry displays and design, they catered to Cleveland’s elite and gave every passer-by a dazzling spectacle.

When Beattie first moved to Cleveland from Canada, he worked at a watch shop called Baxter and Craig. Later, he purchased it and transitioned from watches to primarily dealing with precious gemstones and jewels. He then brought his two oldest sons, Reveley and Hugh, into the business and established the location in the Cleveland Arcade.

With Reveley and Hugh called away to serve in World War I, Beattie brought his youngest son, Milton, into the business. Milton spent time around the shop with his father and would sort through the precious stones. Odd or misshapen ones would be put aside, as they could not be used in typical jewelry designs.

Milton found that he enjoyed making designs with the unusually shaped gemstones, and would arrange them on a small plaque. He became the artist behind the famous window displays at H. W. Beattie & Sons. Among Milton’s designs were portraits of presidents, Thanksgiving Day turkeys, beautiful birds, and nativity scenes.

The plaque display was not the only jeweled artwork that Milton created. He would also create balsawood carvings, coat them in wax, and bedazzle them with gems to create three-dimensional displays. Taking their artwork to the public, Beattie & Sons would exhibit at bridal and floral shows. For these special occasions, Milton would create diamond and gemstone flowers, such as the orchid below, and showcase them in the flower cart from their store.

On the somber day, November 22nd, 1963, the H. W. Beattie & Son’s window display reflected the ethos of a nation. An American flag at half-mast, designed with rubies, diamonds, and sapphires was displayed for a week, in memoriam of John F. Kennedy.

In time, the store moved to its final 1117 Euclid Avenue location. Milton’s daughter Lucy carried on his legacy by creating jeweled window displays until the last store closed. The Beattie boys’ memory lives on in their friends and family and through their timeless pieces of art. Small traces of the store can be found at Bluestone Trading Company in Lyndhurst, Ohio.

This one-of-a-kind ruby and diamond ring was hand-crafted by the jewelers at H. W. Beattie & Sons. According to Terry Krapnec, an employee of H. W. Beattie & Sons from 1958 to 2005, “it was originally made for stock, but it had a fancy golden yellow diamond in it.” The diamond was sold, but not the ring, and was replaced with a ruby. He remembered that later on, the ring was sold as shown. Displayed in the original ring box, the platinum setting features a one-carat ruby, and eleven tapered baguette and round cut diamonds in a geometric design. Historic pieces like this speak to the artistry of the renowned jewelry store that dealt in diamonds and gemstones.

The final H. W. Beattie and Sons store closed its doors for good in 2005. However, as long as you know where to look, pieces of Cleveland’s prominent diamond merchant can be found throughout the city and with collectors of fine jewelry.

In Bluestone Trading’s office, you will also find a gemstone display from the H. W. Beattie & Sons store. This display would be used to help customers select gemstones to use in their custom designs such as the ruby and diamond ring above.

For all your diamond and estate jewelry needs call or text us at 440-442-7280. You can also call toll free at 888 800-BLUE. To be the first to know about our Trading Tip of the Week such as How to set up your Google Business Page, How to Create a Facebook Business Page, and How to Build an Email List, as well as Bluestone’s latest news, subscribe to our newsletter.

How to Reclaim Savings with Recycled Diamonds
September 24, 2020